A Day In The Life of a Gay Toronto Street Kid

It’s a humid summer night and the street is littered with the day’s newspapers, Starbucks cups, trash and all things discarded. The gleams from the streetlight strike the damp concrete creating an amber glow in the dusk. The street is empty and quiet and for Riley it’s a fleeting getaway from the everyday hustle. During the day this stretch of King Street from Dovercourt down to Dufferin is teeming with life, but tonight it’s a safe place for Riley to walk and find a new place to sleep. His old squatting place under the bridge along the Don Valley was recently taken over by some other street kids or “gutter rats” as Riley would describe them.

Being homeless in Toronto is not an easy deal. The violence, substance abuse, constant harassment from the police and general public make it very hard to live on the streets with a relaxed mind. For the countless homeless queer youth the dangers of homelessness are even further amplified. 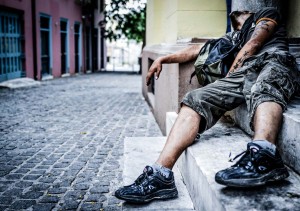 Riley was 17 when he was kicked out of his house by his domineering father for discovering Riley was gay. After being kicked out he did what many youth do and he fled to the metropolis of Toronto from his suburban home in Oshawa.

“I can’t really stay in any shelters because the violence toward anyone perceived as being gay is extreme. And the only place [Eva’s Phoenix] some can turn to is always full and has a long waitlist.” –Riley *

Most nights Riley, along with many homeless youth, spend a lot of time looking for places to squat or couches to surf. Some nights, though, they are left to wander the streets until daybreak and they can either start a grueling new day of panhandling or squeegeeing – or finally pass out in a park.

Like many homeless individuals, Riley spends a good portion of his day panhandling on the streets, in particular the stretch of Queen St. from Bay over to Bathurst. On typical day Riley pulls in around $60, mostly in change. He’s made a career out of annoying Bay Streeters and tourists who toss change in hopes of not making eye contact.

Read the full article here: A Day In The Life of a Gay Toronto Street Kid

The Truth About Job Security

Banana Peels Could Be The Future Of Plastic

The Impressive Benefits of Solar Panels in Homes

How to Do Your Bit for the Climate...