One wintery night in early 2012, Jay Wall laid down a handmade stencil on a Toronto sidewalk. Crouched at the corner of College Street and Manning Avenue, he pulled out a can of white spray paint and began to fill the shape in. He finished the figure and added another four, leaving the concrete decorated with the ghostly shadows of bike posts in the exact spots where the real things once stood—before they were ripped out to make way for an Astral Media billboard. 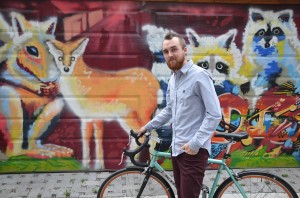 Wall isn’t the only Torontonian to have taken issue with the city’s street-level advertising. He was one of nearly two-dozen street artists who, months after his spray-painting scheme, hijacked Astral’s “info pillars” as part of a project called cARTographyTO. He targeted the same spot, this time designing a fake Astral ad that pledged to replace the bike posts and install 50 more. The campaign was in many ways personal: Wall rides his bike every day, and his three-year-old design company, Studio Jaywall, is “operated by bicycle.” Fighting for bike infrastructure—legally or not—is just one of the ways the 27-year-old activist uses design as a tool for social good.

“I want to be intentional about the way I’m living and what kind of projects I’m working on,” says Wall, a self-confessed perfectionist who operates out of a studio space on the Danforth. There, he does everything from creating logos and posters to designing web apps and online magazines. He chooses business clients that resonate with him: artists, musicians, start-ups, non-profits, and, recently, urbanist organizations dedicated to making cities safer, more liveable, and more accessible.

“That’s why I don’t design billboards for companies that I don’t believe in or try to convince people to buy cars or exploit oil from tar sands.”

Wall’s sense of social responsibility and design roots both go back a long way. Growing up in a religious home outside North Bay, Ont., he gained a strong sense of compassion from his mother who was an educational assistant. His father, a man who worked long hours in construction management, passed on to Wall a tireless work ethic. The rural setting meant Wall and his brother had to be resourceful, mapping out imaginary countries and designing logos for fictional sports teams to keep themselves occupied. That knack for creativity eventually landed Wall at York University and Sheridan College, where he studied design.

It was when he was in school, while participating in a grassroots outreach program for the homeless, that Wall first witnessed injustice. He got an even better look at it in 2010 when he travelled to Guatemala for six weeks with Operation Groundswell, a global backpacktivist program. There, he learned about a 36-year-long civil war that plagued Guatemala and discovered that many of the nation’s issues were closer to home than he might have thought.

“You don’t want to wear a Canadian flag on your backpack in Guatemala,” Wall says, explaining that Toronto-based mining companies continue to exploit the lives and land of Guatemalans.“I said, ‘So this is what injustice is like. I haven’t felt it yet, but I kind of get it.’” 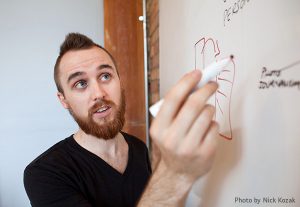 It wasn’t long before Wall truly felt it himself. Within a week of returning to Toronto, he was in jail. On his way home in late June 2010, he suddenly found himself surrounded by 20 bicycle officers. In the middle of the G20, the bandana Wall wore around his neck was enough to get him arrested and charged with Disguise with Intent. He was detained for 28 hours without access to a phone or a lawyer until just before being released. More than a year later, he became one of the first people to settle out of court with the Toronto Police Services Board for being unlawfully arrested. The officer who made the arrest has since been found guilty of misconduct, while an investigation into Chief Bill Blair’s conduct during the G20 is underway because of Wall’s formal complaints.

Wall travelled to Guatemala for a second time in the summer of 2011 to lead a group of 10 backpackers. Since returning to Toronto and founding Studio Jaywall in September 2011, he’s lent his design skillset to the Mining Injustice Solidarity Network, one of the few clients Wall has worked pro bono.

“With Jay, it’s not, ‘I hate the establishment,’” says Joe Zambon, a Toronto singer-songwriter whose albums feature artwork designed by Wall. “He just knows people in places that are affected, and he’s just helping out friends.”

Studio Jaywall grew steadily; to a point where Wall could only accept half of the projects clients proposed and had a junior designer working with him full time. The overabundance of work encouraged Wall to take time off last summer to think about the future of the studio. “That distance gave me some perspective,” he says. Instead of taking a traditional route—find a business partner, hire a few staff, find a bigger studio—he decided to stay independent and develop a network of collaborators that he can tap for specific projects. The choice has allowed him to maintain a direct, one-on-one relationship with his clients, which is important to him, he says.

“I pride myself on having that old-school customer service but with the standard of design you’d expect from a reasonably sized agency with a big overhead.”

Recent clients include Jane’s Walk (he designed the ads for the 2014 Jane’s Walk  campaign which focuses on building healthier, more vibrant cities), Spacing magazine (he illustrated the cover of the Summer 2014 issue), the design think-tank archiTEXT, and the urban environmentalists at Evergreen CityWorks. He also helped create PlayWalk, a neighbourhood project that encourages engagement with the city through play.

Perhaps Wall’s passion for social responsibility, urbanism, and making the city a better place takes its roots in his small-town upbringing.

“I don’t think we had a word for it,” says Wall’s brother, Dustin. “We wouldn’t have called it social justice. It’s just doing the right thing.”

A version of this article can be found here: Toronto Designer Fights Corporate Greed

The Life of a Contact-Juggler

The Centre for Social Innovation

Before he died, Van Gogh wrote a letter...

This activist is fighting the decline of the...

24 famous artists’ studios will grant you a...

Photo-series gives you a rare glimpse into the...

A female magician cursing patriarchy is the closest...

Blind artist’s paintings will change your perception of...

The Two Passions of Howard Hodgkin

This is the first museum where blind people...